Newton Shinobi - Clearly a Cut Above 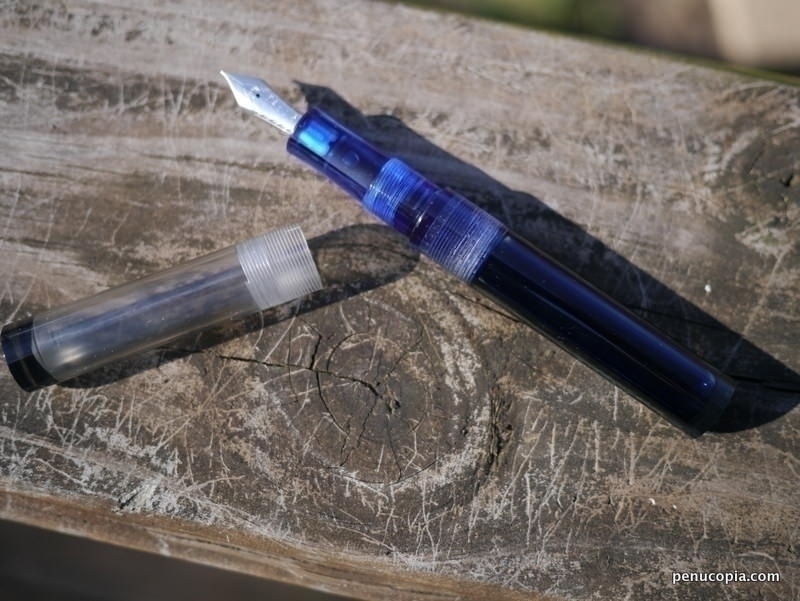 As I’ve mentioned previously, one of the best things about buying a pen from a custom pen maker is that it can be customized in many ways to the exact specifications you desire. In some cases, certain pen makers will make truly bespoke pen. This is the case with pens made by Shawn Newton at Newton Pens. Today, let’s explore the story of my clear Newton Shinobi and why it is such a great pen that I had two more made.

Before we talk about the pen itself, let’s start with a quick aside about the man behind Newton Pens, Shawn Newton. Shawn is a very active member of the fountain pen community. I first started to interact with Shawn on the Fountain Pen Network (FPN) forum, where he is a forum moderator. But Shawn is also an amazing person that I love supporting. You see, Shawn was an art teacher who started making pens on the side. He was literally burning the candle at both ends by teaching during the day, working long hours on evenings and weekends making pens, and being very involved in his family of four. He recently announced that he is now officially full-time at Newton Pens, as of May 2015.

But there is a lot more about Shawn that you should know about, as I think it will help you understand why I respect him so much. Shawn has an amazing life story that begins with someone’s amazing generosity helping change the course of his life. Even though Shawn was only making a teacher’s salary, he truly is paying it forward to others in the same amazing way that he was helped many years ago. Shawn created a Kickstarter campaign to help him raise the funds necessary to buy equipment to make pens, and also makes extra pens that he gives away to students. He also raises money to fund scholarships for students, which is a lovely homage to the generosity that came to him at such a pivotal point early in his life.

But not only is Shawn someone I like as a person, he’s also a very talented, driven, and creative. And he creates truly bespoke pens as a result. Shawn’s background in art and his willingness to experiment puts him in a unique place in the custom pen maker world. Who else will hand engrave artwork into a pen or make a hammered silver pen, for example?

Having purchased pens from Shawn in the past, I know he is not afraid to try new things. I had him make a pen for me that holds Esterbook nibs, for example, since I like the variety that Esterbrook nibs provide, but dislike using lever filling pens. Having had multiple successful “exploratory firsts” like this with Shawn and seeing how his craft has improved over the years gave me confidence to continue collaborating with him on a custom Shinobi.

Now back to the Shinobi. You see, Shawn has made several Shinobi’s and the model is part of his standard lineup. But the design wasn’t his creation. It was originally commissioned by a customer of his. The name Shinobi means ninja in Japanese. The original pen was black with a thin red band between the cap and barrel. When uncapped, the red section was exposed, resulting in a “bloody surprise”, as described by the designer.

The design proved to be quite successful. In fact, after the first Shinobi was made, others requested their own Shinobi pens from Shawn. Luckily, the original designer who commissioned the pen allowed Shawn to make other Shinobi pens for customers. Many subsequent pens were requested in the original black and red combination, or some other combination of opaque colors.

What intrigued me about this pen design was how simple and clean the design was. A very streamlined and minimal design that also had one aspect that I fell in love with: a flat facet that prevented the pen from rolling. Pens without clips have a clean look to them, but they often roll around when left uncapped.

Through my previous experience with Shawn making multiple sections for other pens and excellent input from a good pen friend, I knew I wanted him to build a custom section around a nib and feed that I loved. But there were a couple of other things I wanted changed from the original Shinobi design.

I knew that while I love pens with a flush cap and barrel design, I dislike the step down to the section from the barrel. So I asked Shawn to minimize the barrel diameter as much as possible while still allowing the pen to have the distinctive and practical flat facet. Shawn and I discussed this and he determined what he felt would be the best compromise between thinness while still allowing the flat facet to be useful.

The biggest change I wanted was to go with transparent materials for my Shinobi. You see, I like to eye dropper my pens, something I picked up from Julie at Peaceable Writer. I also love watching the ink slosh around in my pens, as demonstrator pens take on a totally different look depending on what ink is in them. A transparent pen would also allow me to see how much ink I had remaining in the pen. I chose to go with a transparent blue material for the section (and front of the barrel) and a transparent dark gray for the remainder of the barrel and cap.

With all of the design decisions made, I sent Shawn the nib and feed in their original section and waited (somewhat) patiently for my turn in his work queue. 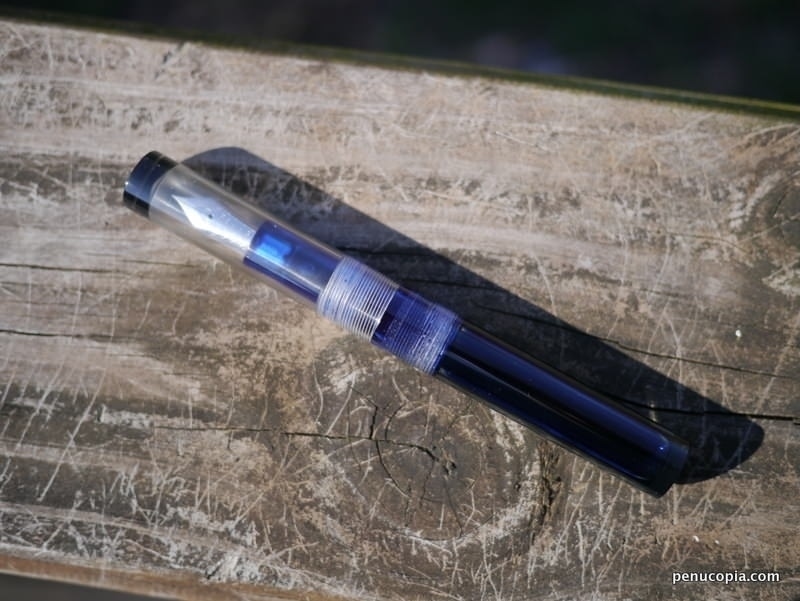 Shawn posts photos on Instagram while pens are being made. It is nice to see your pen being created. Being able to see the various stages a pen goes through while being made gives you an appreciation for the time and craftmanship that goes into making a custom pen. Shawn also posts a blog entry when your pen is completed.

(Want to really know what it takes to make a Shinobi? See Leigh Reyes’ video of Shawn making her Shinobi.) 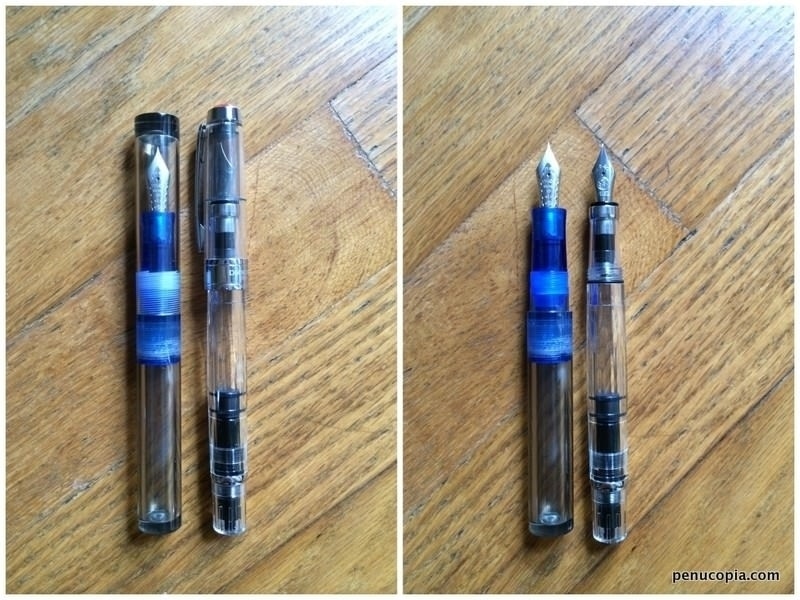 Once the Shinobi arrived, I knew that this pen was truly something special. The combination of transparent materials, a custom nib/feed, the smaller step down to the section, the flat facet, and the balance, size, and weight of the pen were literally perfect for me. It exceeded my expectations, and I quickly found myself always keeping my Shinobi inked up.

I was intrigued by how similar the pen was in size and shape to another favorite pen design that I find very well-balanced — the Danitrio Sho-Hakkuku (Short Octagon). 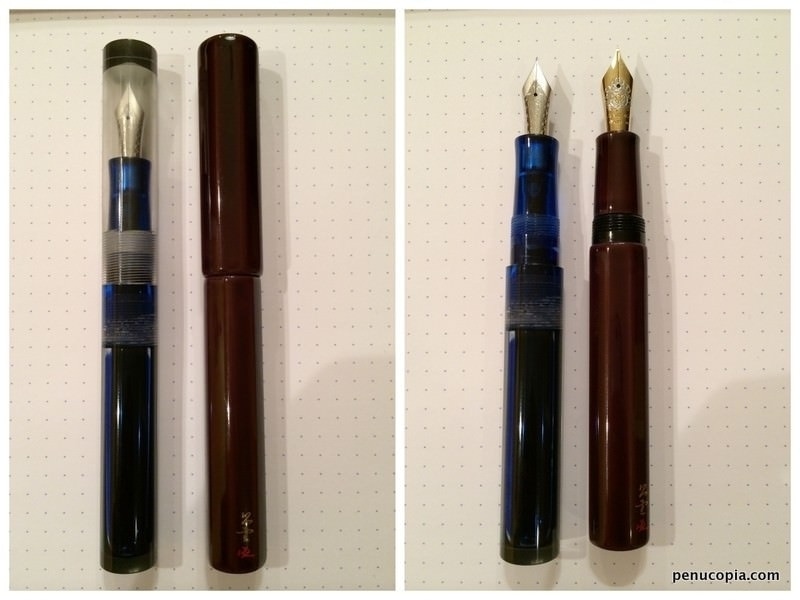 The funny thing about the Shinobi is that it seems like an ordinary pen. Seeing photos of it make the design look almost too simplistic. But once you get to see the pen in person and hold/use it, you really get an appreciation for how perfect this pen is. I have had multiple people tell me that they were completely uninterested in a Shinobi, and then I showed them mine. Let’s just say I’ve converted most people into Shinobi believers once they get to touch and use it. 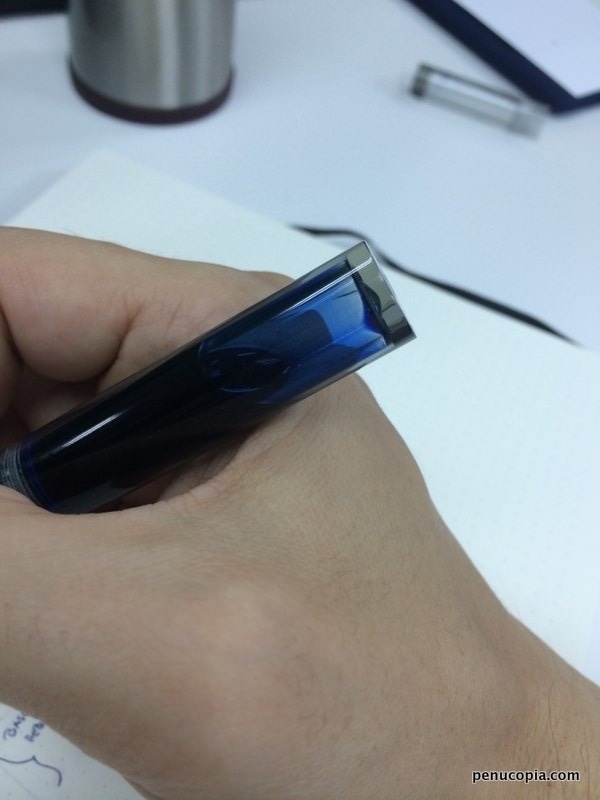 The pen is well-balanced in the hand. My most common use case is note taking at the office, but it also works well for writing letters. I love that I can use the pen and set it down on the table, uncapped, and it doesn’t roll away. Using Pilot Blue Black, I can leave the pen uncapped for 20-30 minutes and it doesn’t have any issue starting up when I pick it up again. The perfect note taking pen. 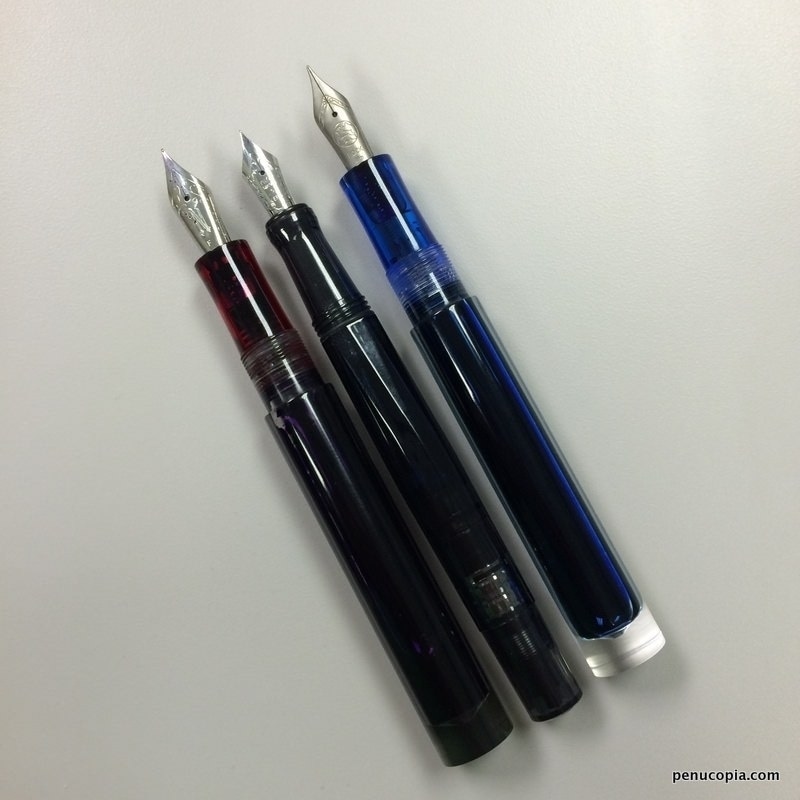 Shinobis and TWSBI side by side on table

The ink capacity as an eye dropper is huge, especially with a Japanese EF size nib on the pen. I actually used this pen daily to write notes during an overseas work assignment and didn’t have to refill it for over 4 months. 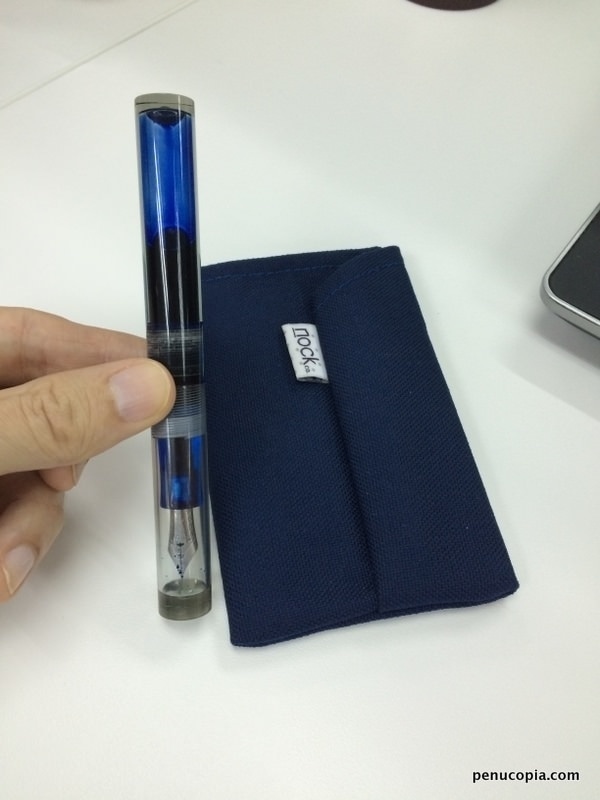 Having used the Shinobi extensively for over a year, I have had the opportunity to gain even more appreciation for the design. However, knowing what I know now, there were a couple of very minor things that I would have done differently if I were having the pen made over again.

The original Shinobi is the same length as the Danitrio Sho-Hakkuku. It works well in my hand because I hold the pen near the front of the grip section. But a few people have mentioned to me that they would have liked the pen to be just the tiniest bit longer. However, I wouldn’t want to add too much length, as I think it would throw off the balance for me.

The biggest change I would make is having a single piece of material for the barrel. The original design of the Shinobi was for a black pen with a sliver of red on the barrel, and the same material was shown on the section when you uncapped the pen. However, for a pen that is made with translucent materials, this isn’t necessary, as you can see the section even when the pen is capped. I dislike seeing the threads where the two pieces of the barrel meet.

These concerns are minor, overall. They only are cosmetic, and don’t have anything to do with the pen itself. But I knew if I ever had any more Shinobis made, they would have these improvements. 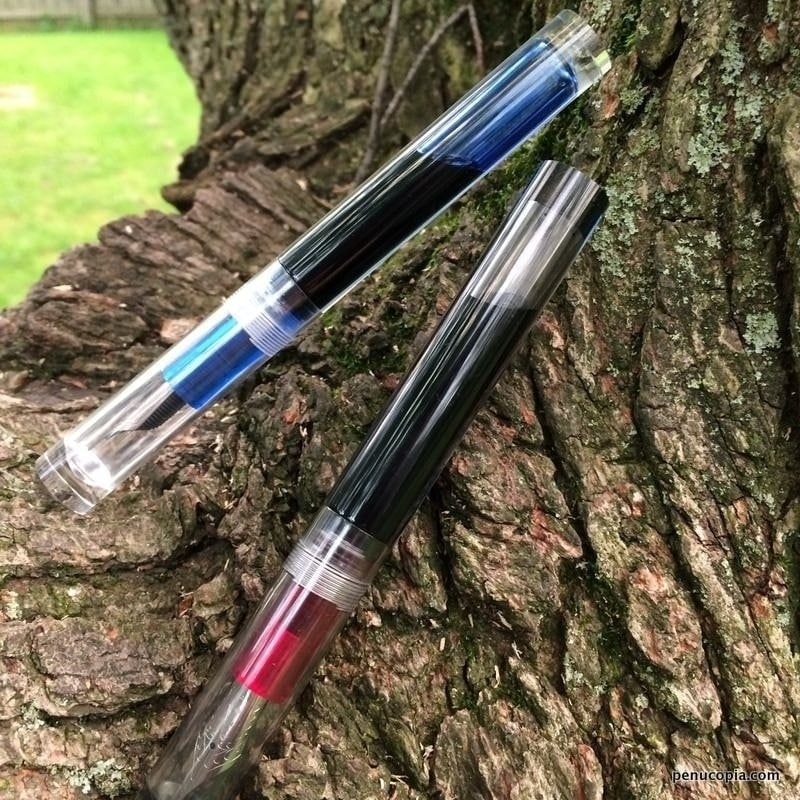 Have I mentioned yet how much I love my Shinobi? I love the pen so much that I had two more made! For the two recent additions, I chose to have them lengthened slightly and to have the barrels made from a single piece of material, thus addressing the minor concerns above. 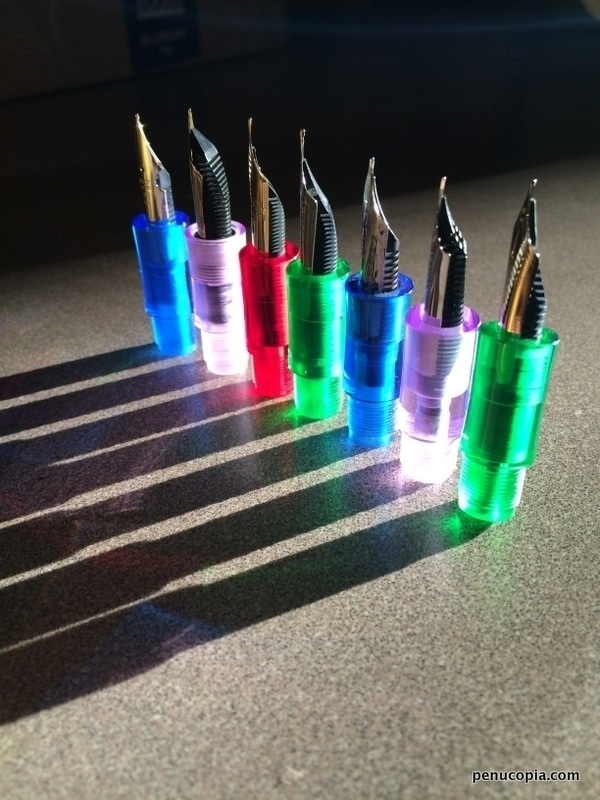 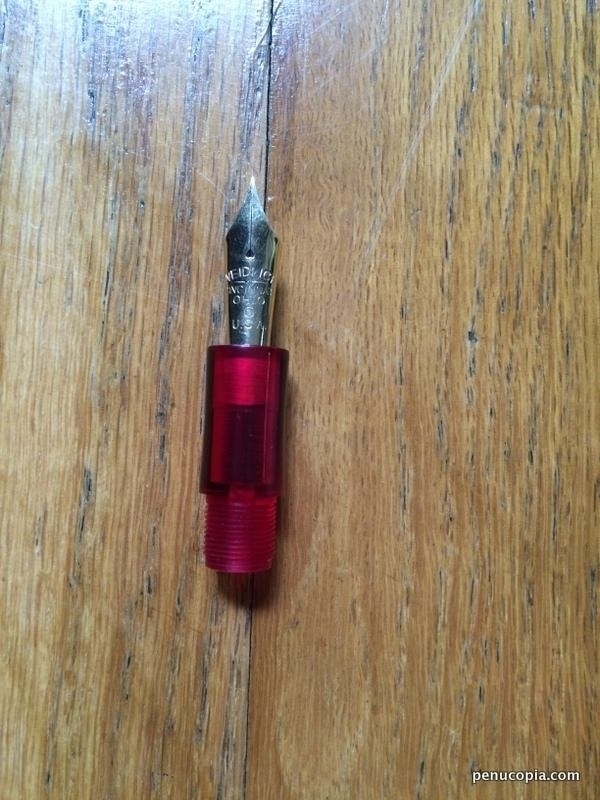 I also asked Shawn to make multiple sections for my Shinobis, using some vintage and already custom ground nibs I had. I asked him to make all of the sections interchangeable so I could swap them between all three of my Shinobi pens. 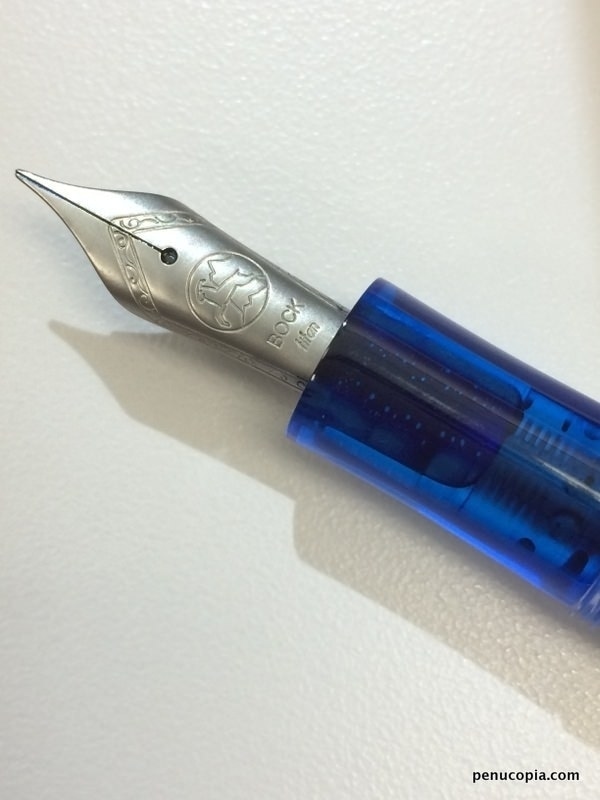 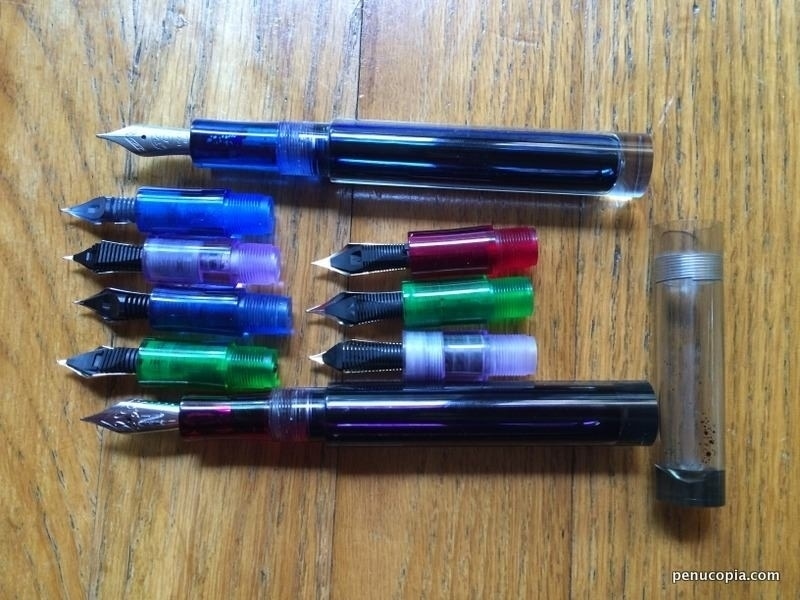 I went with an all clear for one of them, and dark gray for the other. Section colors are different to easily allow me to see what nib I have in which pen.

What would I change about the new pens? Not a single thing. 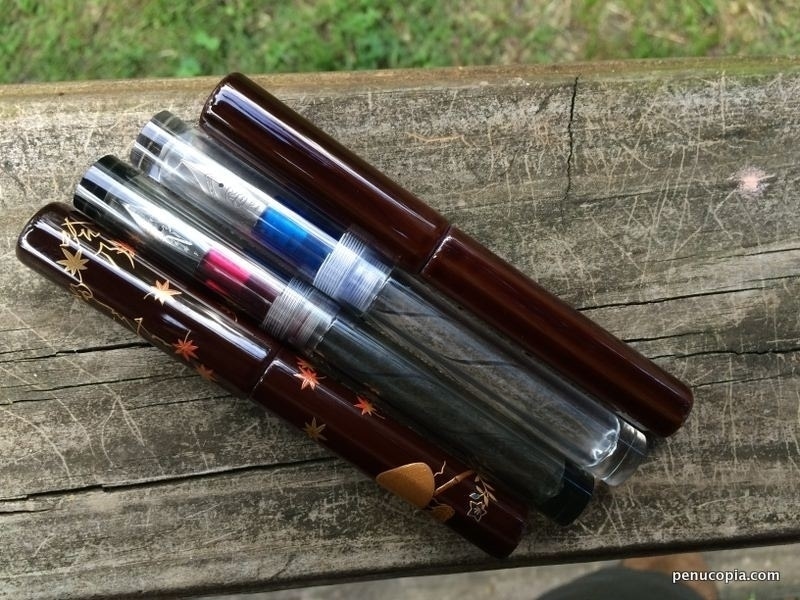 So what do I think about the Newton Shinobi? If I could only keep one pen, it would be one of my Shinobis. Yes, the Shinobi would be my “desert island pen”, to go with my desert island ink. 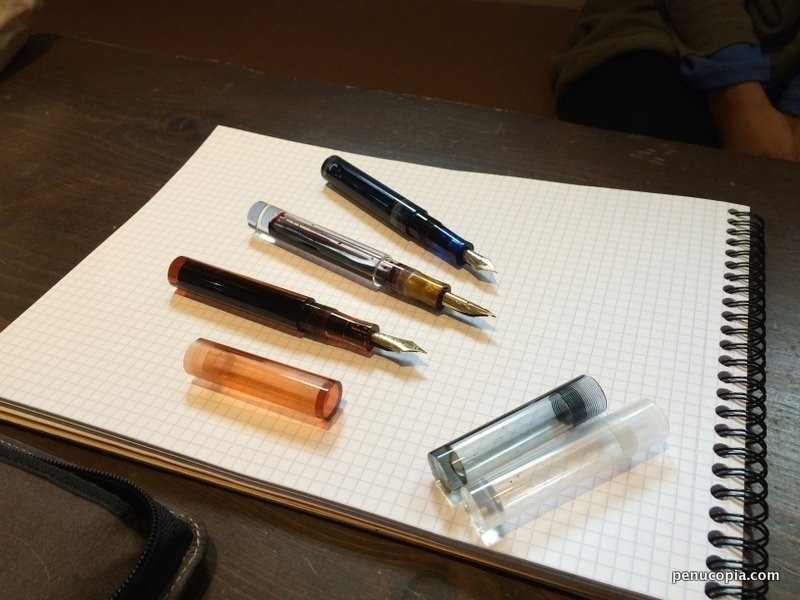 The Shinobi is a pen you have to hold and use to really truly understand. Seeing photos of it cannot do the pen justice. In fact, two of my pen friends didn’t initially understand why I was such a rabid fan of the Shinobi. Then they were able to use it. Both ended up commissioning their own Shinobi as a result. And others who have seen it since have added a Shinobi to their list of future pens.

(Leigh even suggested that we record a video singing “My Shinobi!” to the tune of “My Sharona”.)

And, of course, read the origin story of the Shinobi, by FPN user Inguz.

Tagged: pens, custompen, newton
Have a question or want to comment? Contact options on the About page in the sidebar.