Sometimes, your first experience with something sets the bar so high that it is difficult for anything else to compete with it. Such is the case for me with Pilot Blue Black ink. As I mentioned in my fountain pen origin story, I started using Pilot Blue Black in cartridge form in a Pilot Vanishing Point. Little did I know that the ink I started using would remain my favorite ink.

What’s in a name?

In the USA, Pilot markets their fountain pens pens under their Namiki brand. The Pilot name is used for gel, ballpoint, and rollerball pens. However, in Japan and elsewhere abroad, Pilot brands their fountain pens under the Pilot brand, and their very high-end pens under the Namiki name. Similarly in the USA, we have Namiki ink bottles available to us, but not Pilot ink bottles. They’re probably the same, with different bottles and brand names, right? (Note: I’m discussing standard Pilot inks here, not the Pilot Iroshizuku line, which is Pilot’s premium ink brand. That is a topic for another day.) 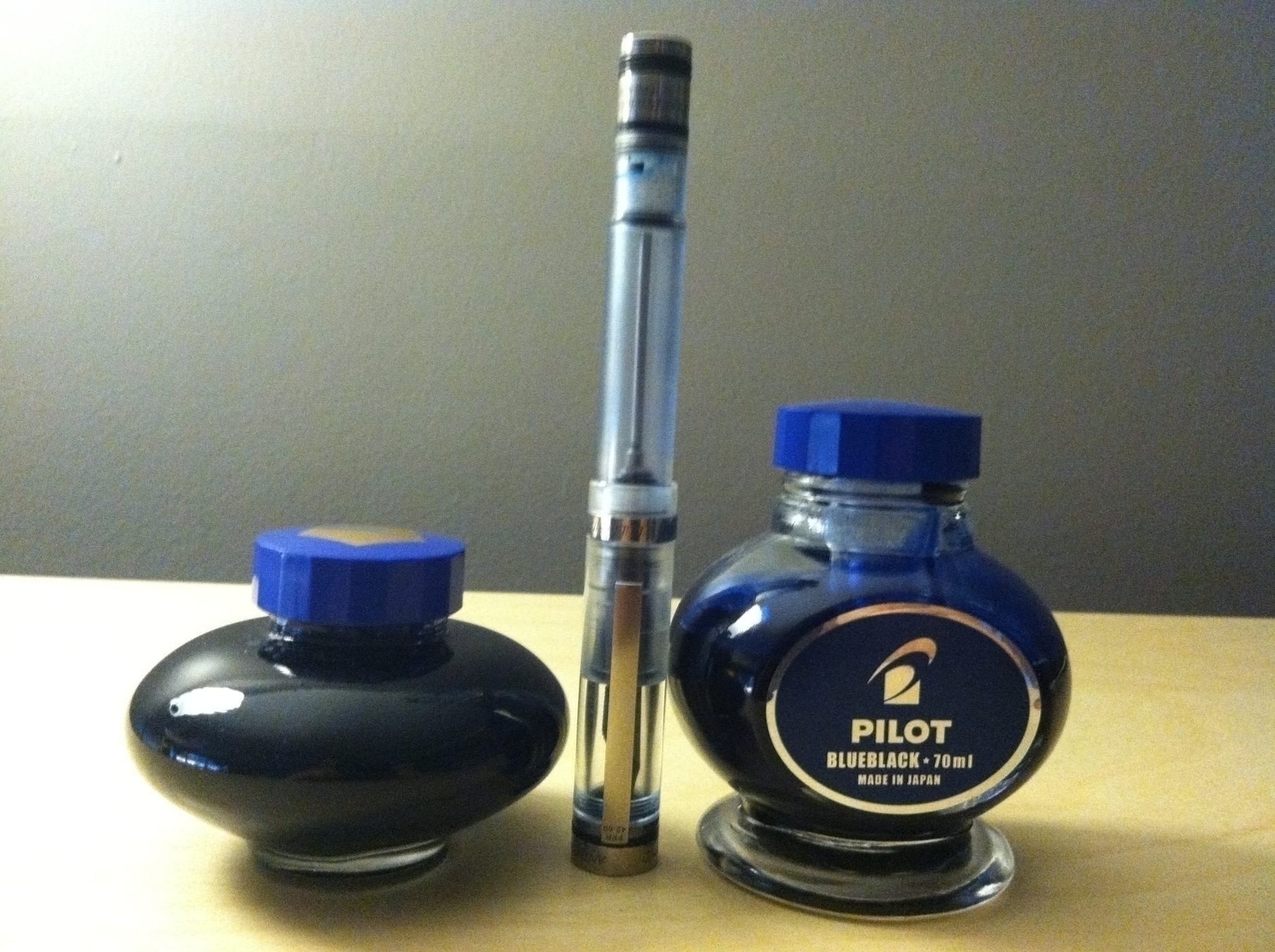 While you would think you the name and bottles are simply different, that doesn’t seem to be the case. Pilot sells Namiki Blue and Namiki Black inks in bottles in the USA. But these bottles differ in size and shape from their Pilot counterparts. Pilot ink is additionally available in Blue Black.

My anecdotal experience with both Pilot and Namiki inks leads me to feel that they are slightly different formulations. Others feel similarly, including Julie at Peaceable Writer; and I definitely trust Julie’s opinion on the matter. (More information in the Further Reading section at the bottom of this post.) 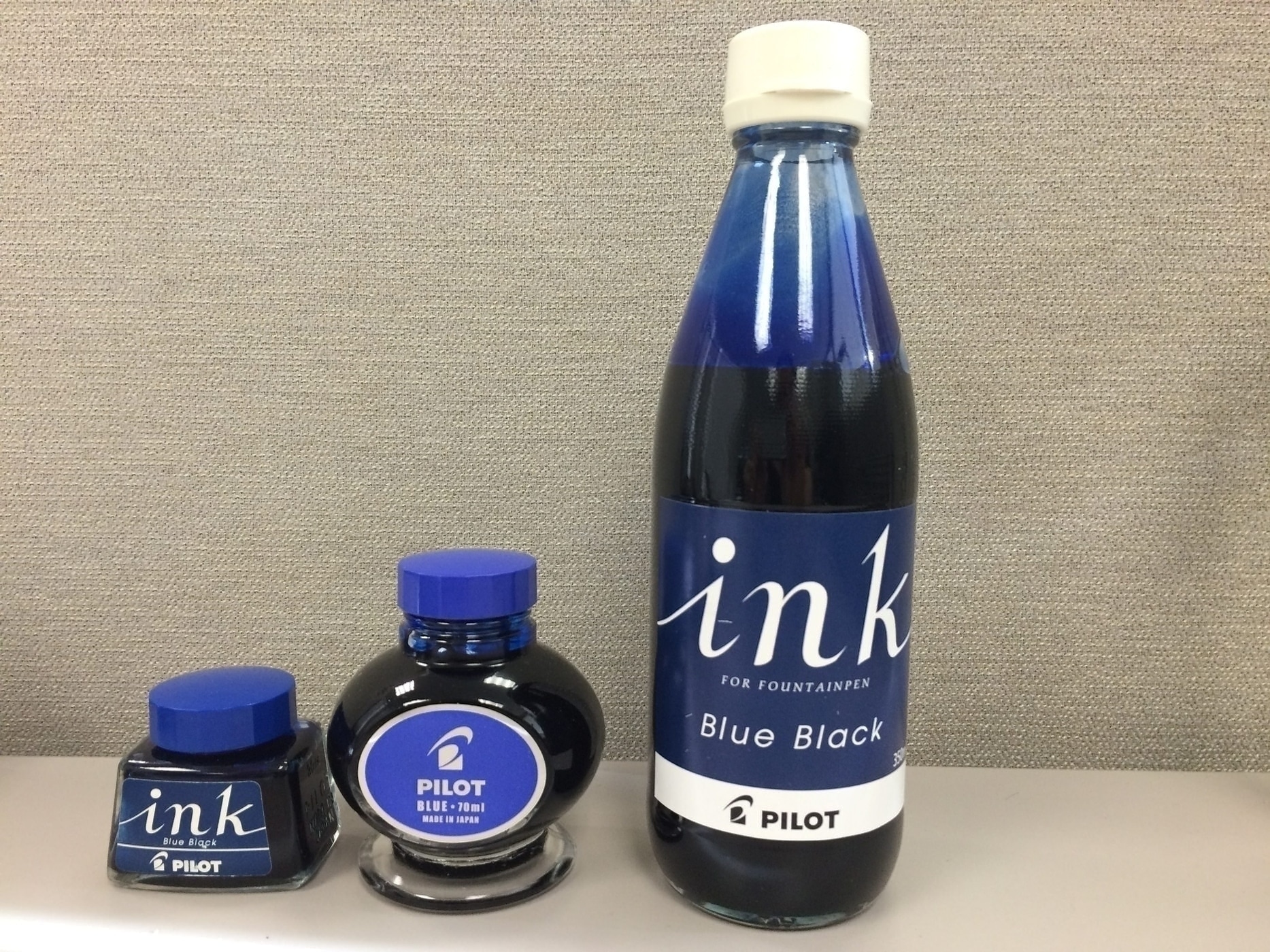 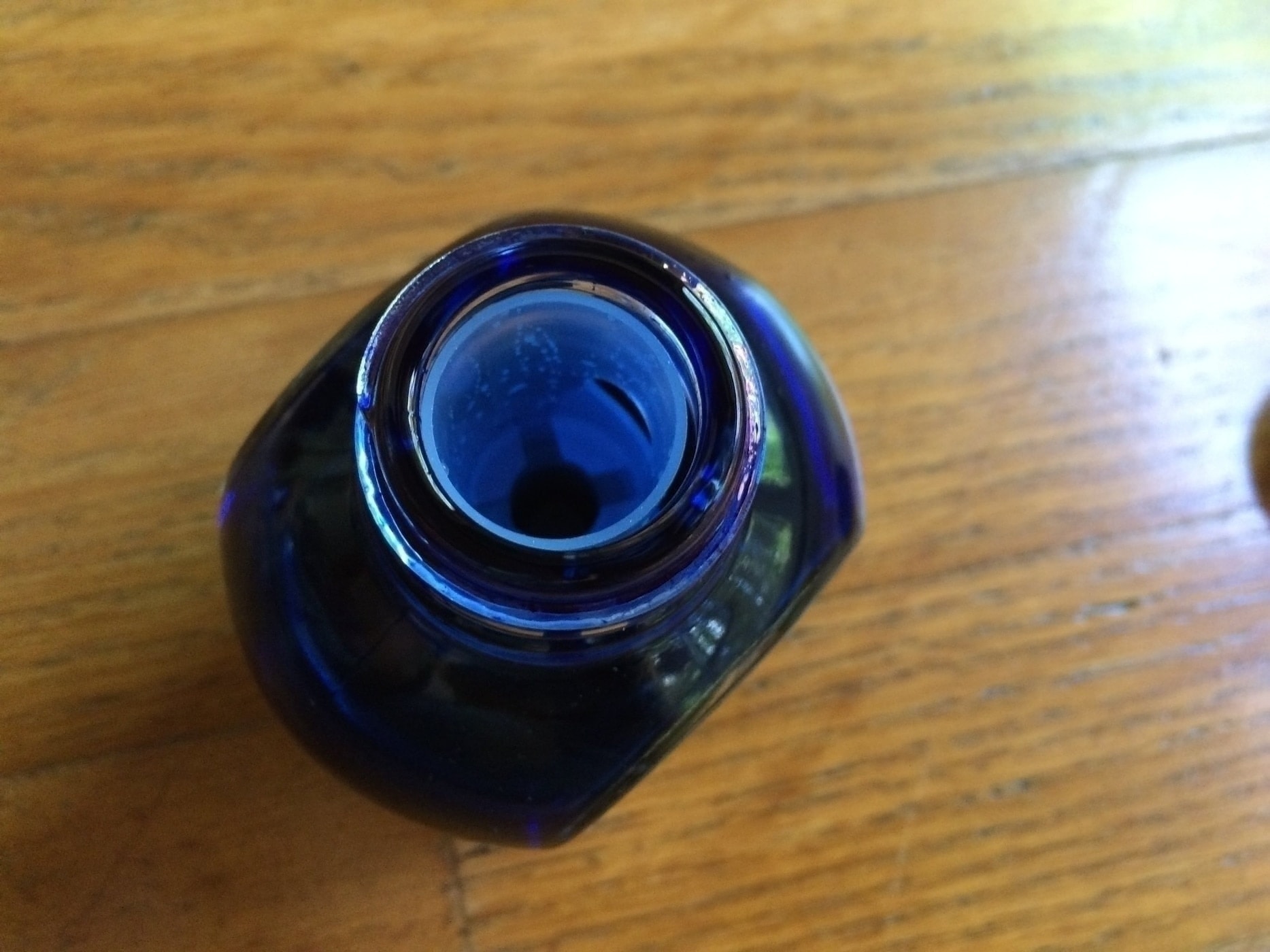 The 70mL bottle also has a nice trick up its sleeve. It has an inner reservoir that can be filled by turning the bottle upside down. This makes it easy to get all of the ink out of the bottle without having to resort to a syringe or eyedropper. Other ink bottles have this same sort of system, including the TWSBI Ink Bottle. Sailor, too has this, but I find their bottles too shallow to work with larger nib pens. 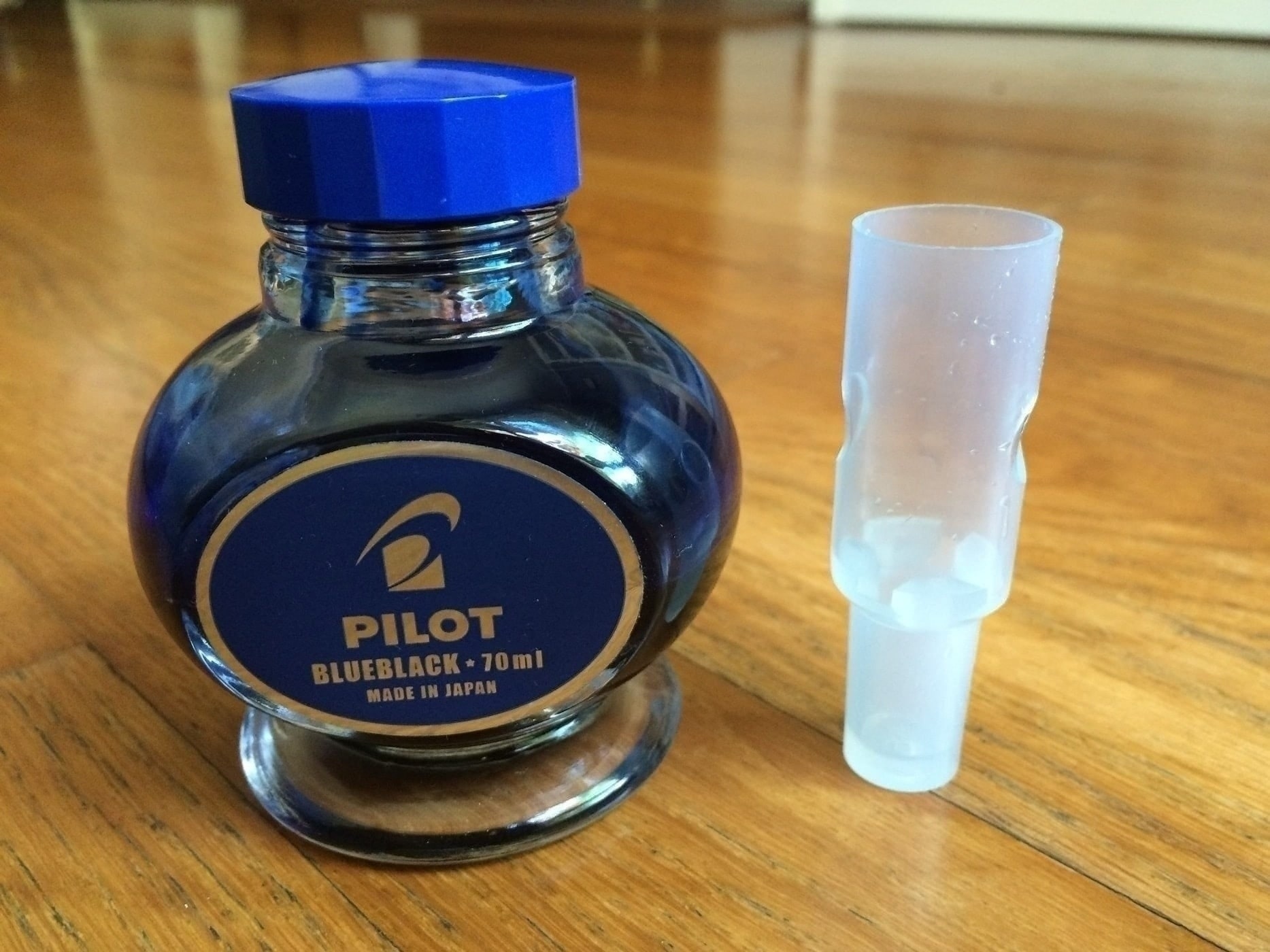 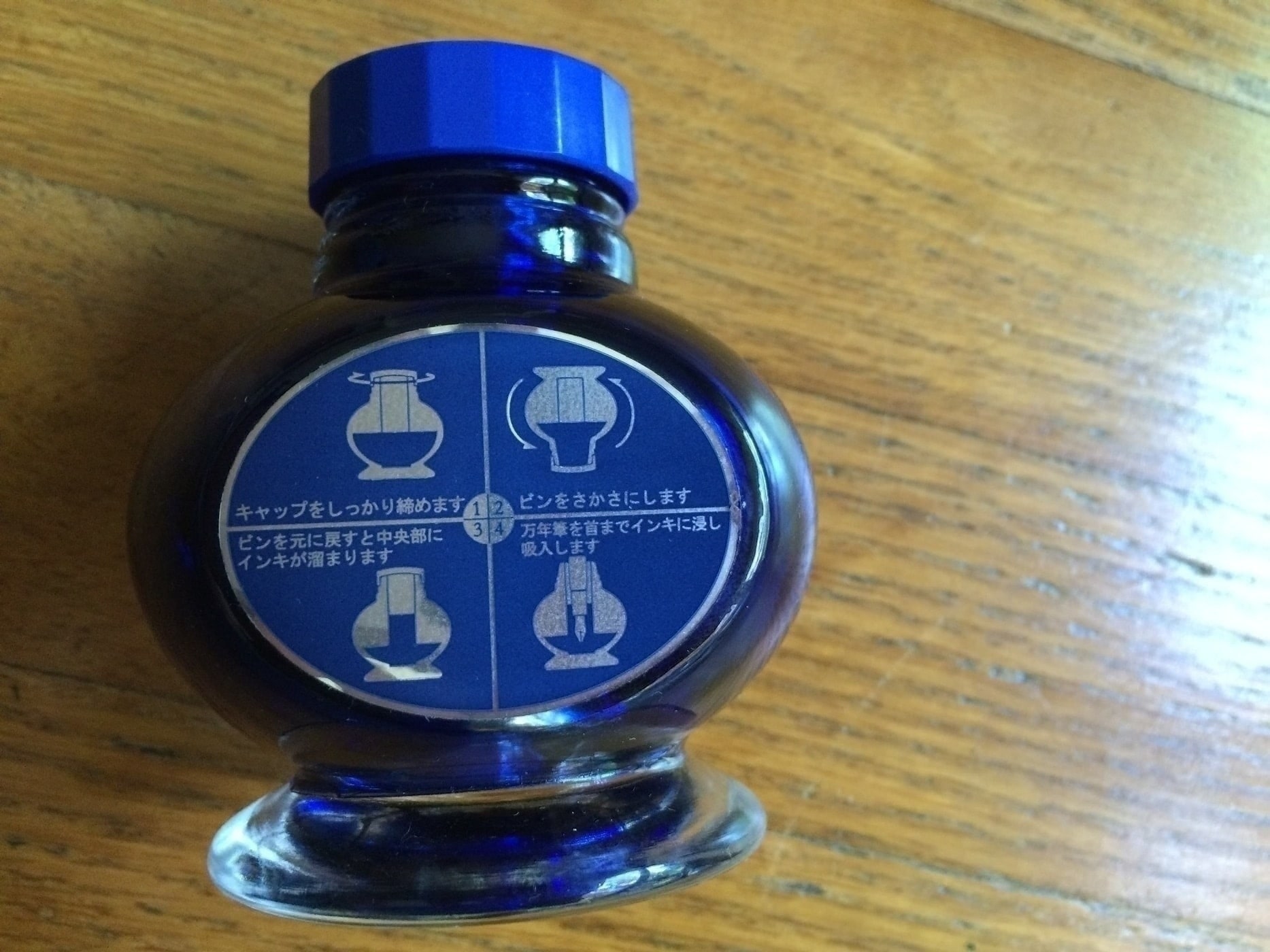 Pilot Blue Black is generally a very well-behaved ink. It is a wet writing ink that can spread slightly on some absorbent papers. But generally, it works well, even on cheaper paper. One advantage of the ink being so “wet” is that it flows well in most any pen. Pilot Blue Black is also quite easy to clean out of pens.

Pilot Blue Black also flows instantly when a pen is uncapped. As an added benefit, this ink doesn’t dry out like many overly saturated inks do. For example, on my PiloTWSBI inked up with Pilot Blue Black, I can leave the pen uncapped on the table for 15+ minutes and the pen will start right away. This is excellent for note taking at the office or during meetings, as I don’t have to uncap and cap my pens over and over.

Even though Pilot Blue Black doesn’t dry out on the nib, it dries fairly quickly on paper. If you’re a leftie, this is definitely an advantage. It dries quickly on regular paper or even higher-end coated papers like Rhodia.

For me, it is critical to have an ink that can survive water/coffee/tea spills. Pilot Blue Black is fairly water resistant while being much easier to clean out of a pen than something like an iron gall or nano/pigment ink. I can leave Pilot Blue Black in a pen for months at a time with no adverse affects to a pen. How good is the water resistance? Look at the before and after photos and judge for yourself. I left the right half of this page running under water for several seconds. 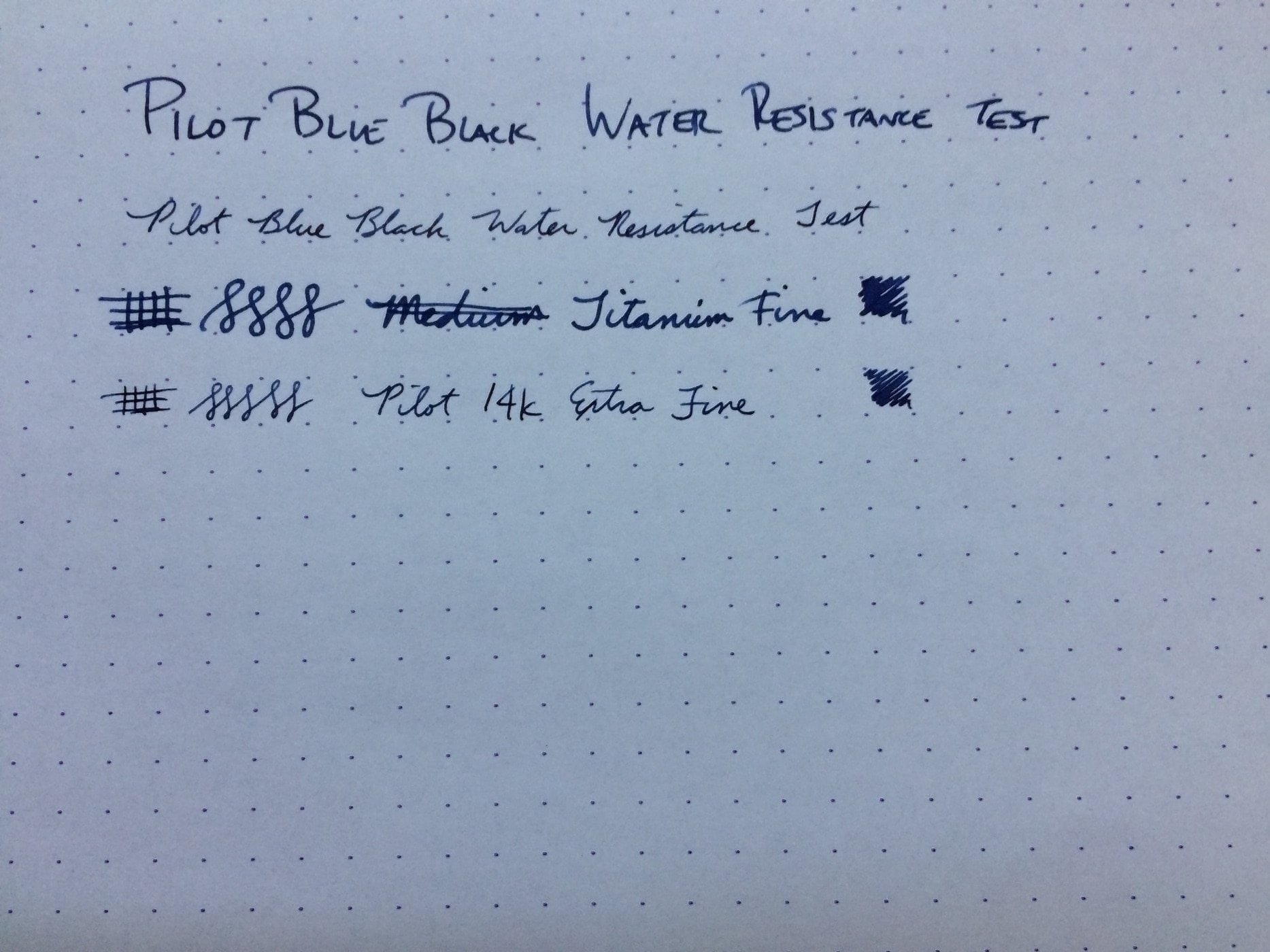 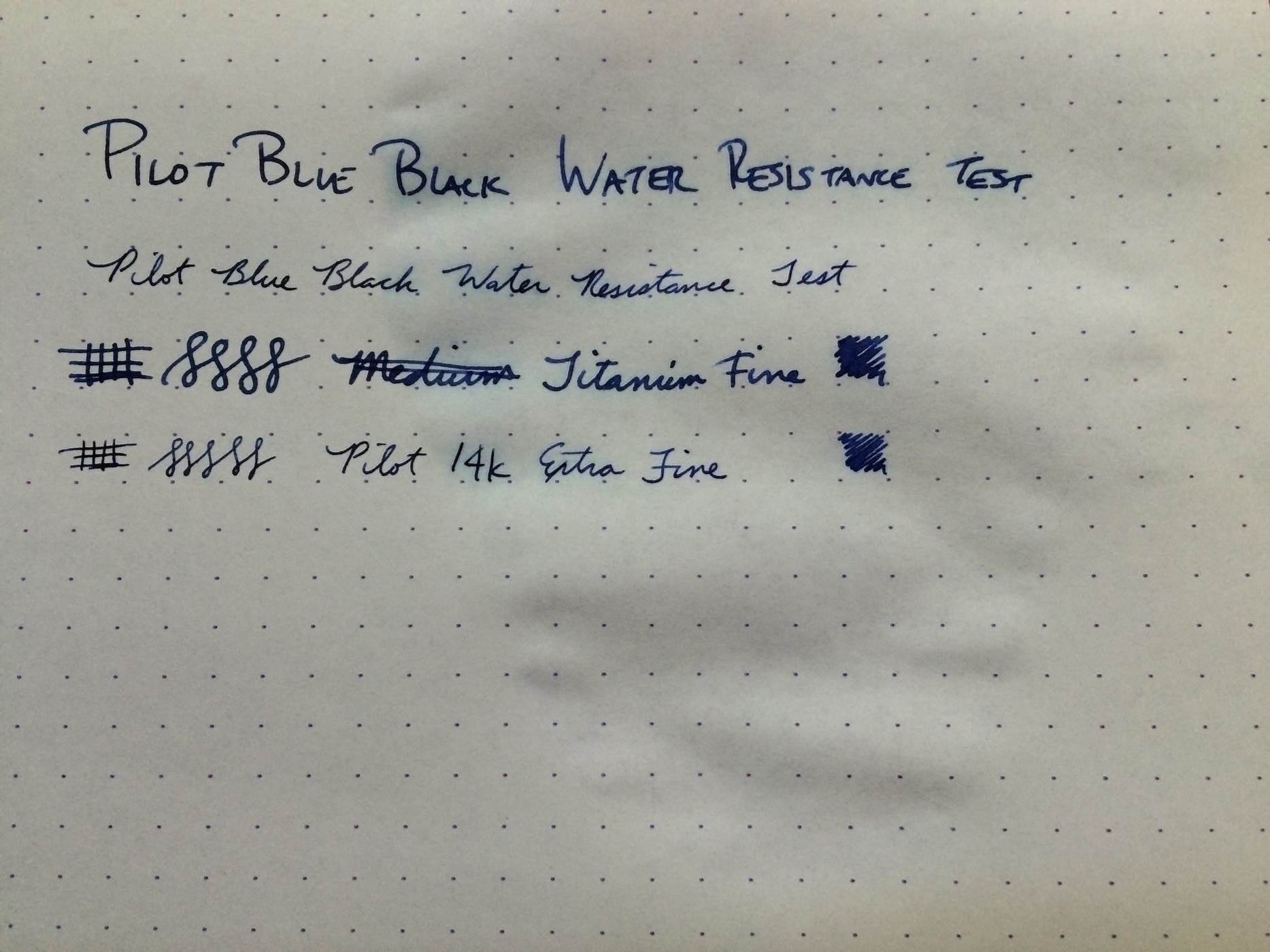 Pilot Blue Black writing sample, after half the page was wet After water was run on the right half of the page

Shading and Sheen? Check. A Chameleon Color too.

There are some who really care about shading and sheen with an ink. Pilot Blue Black does deliver this, although it isn’t something that I’m looking for in my everyday note taking ink. But it does have it. In fact, Pilot Blue Black will leave a lovely red sheen all over a feed. You know when you’ve been using it in a pen. 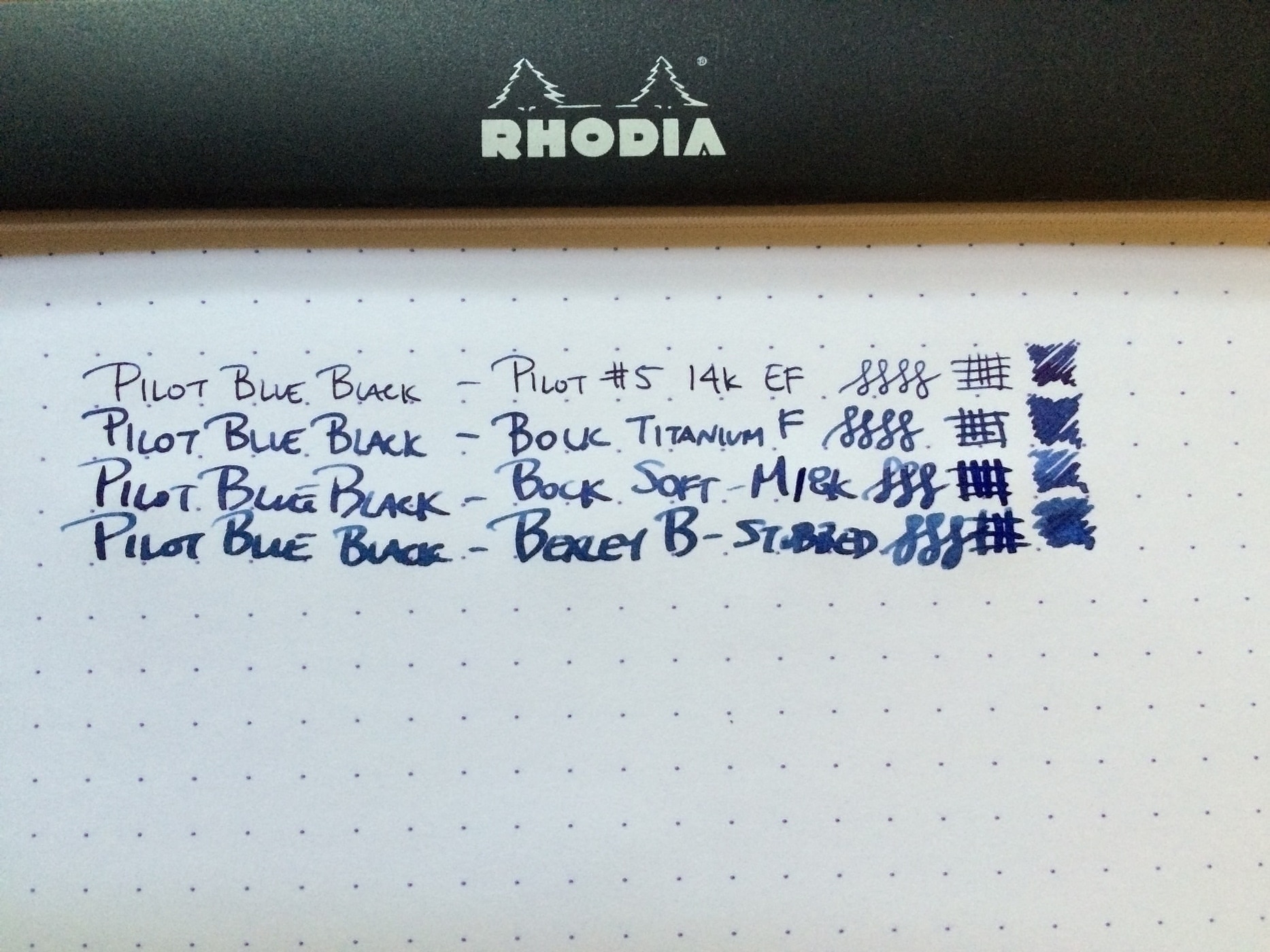 The many looks of Pilot Blue Black

In general, when Pilot Blue Black is wet, it is a pretty vibrant blue. When it dries, it becomes more of a blue black, with a nice gray tone to it. But in some cases, I’ve seen it look bright and almost purplish. I love how varied it looks. 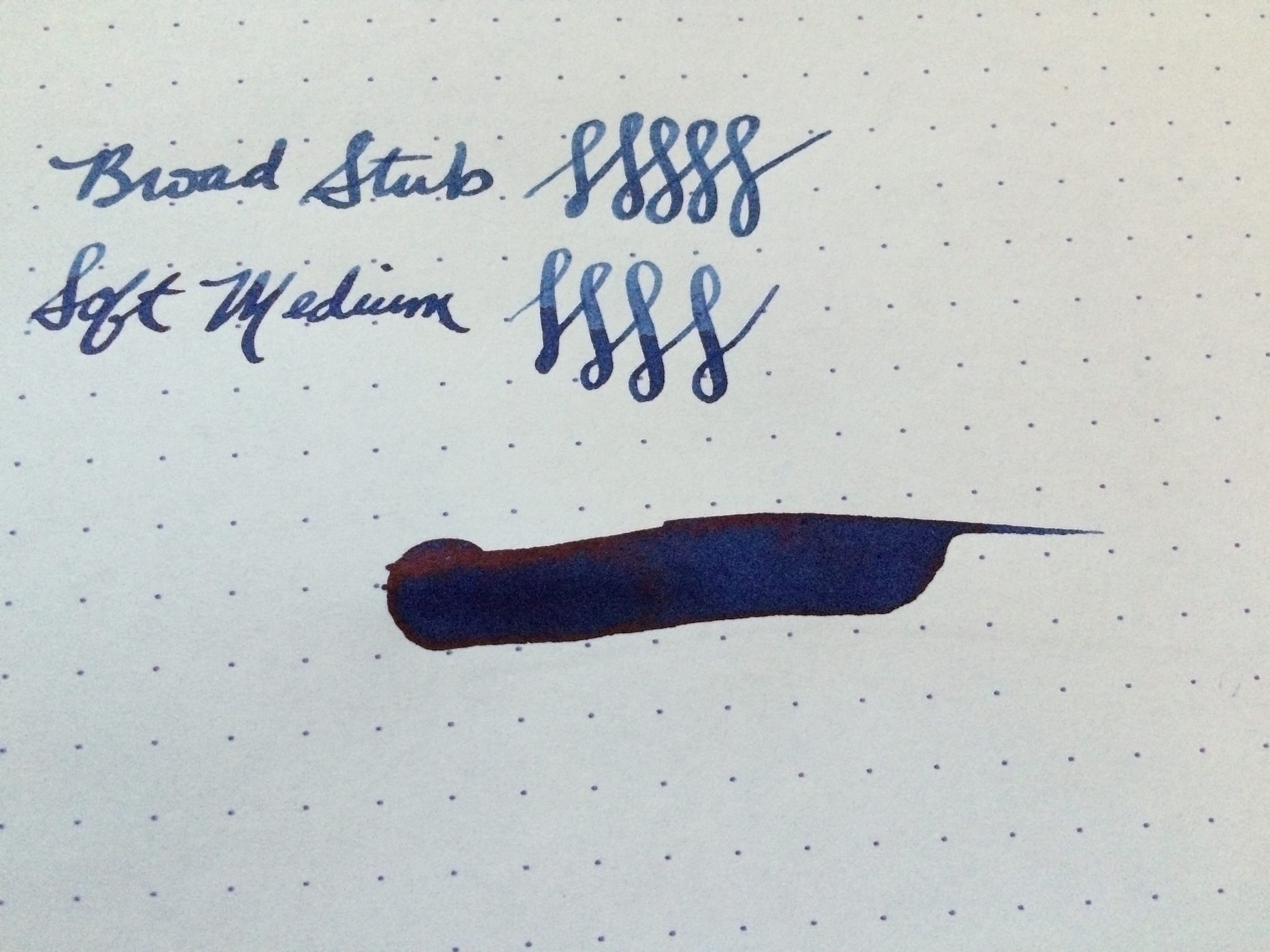 Honestly, there isn’t much that I dislike about Pilot Blue Black. There are a few things I’ll point out that may be an issue for others.

In some pens that have a large ink capacity, I have seen Pilot Blue Black saturate the feed completely to the point that it will blob ink onto the page when writing. In some, but not all of my eyedropper pens, I had ink drop onto the page while writing. No such issues with other inks (such as Waterman Florida Blue) in these same pens. Usually, the pens in question are eyedroppered, but not all of my eyedroppers exhibit this behavior with Pilot Blue Black. For example, see Pilot Blue Black in a Danitrio Densho, a Japanese eyedropper, with the stopper opened up so ink could flow freely:

Then, there is “the smell”. Pilot Blue Black has a strong chemical smell. It’s very distinctive. Sailor inks, for example, have a strong smell as well, but it’s different. I can actually tell which pen I have inked with Pilot Blue Black simply by smelling the feed. I personally don’t have an aversion to the smell. In fact, it’s easier on my nose than Sailor inks. But some people may be turned off by it.

The only other “dislike” I have is that this ink isn’t available in the USA. You have to import it from a retailer in Japan, either directly or via Amazon/eBay. I really wish Pilot would sell Pilot-branded inks in the USA.

I prefer this ink over all other Blue Blacks. The performance, price, and reliability make it my favorite ink to use overall. All pens I get start with a fill of Pilot Blue Black. It’s an ink I’m very familiar with and it is so well-behaved that I use it in virtually every pen, drippy nib pens excluded.

But don’t take my word for it. Give it a try sometime and see what you think…

Tagged: inks, pilot
Have a question or want to comment? Contact options on the About page in the sidebar.